Attoboy began with comic books. I’d always read them and, like many fans, felt inspired to try my hand at creating them. The problem in 1993 was that there was a substantial production hurdle. In those days a zero-budget comic was produced with pen and paper and printed in a photocopier with generally raw and erratic results. It was a frustrating time for someone accustomed to the quality of large-scale printing.

Early that spring a buddy (Matt – you scoundrel!) loaned me a Mac Classic and I spent several happy months churning out scripts and learning how to use page layout software. It was the first time I’d returned to serious computer use since packing up the old Franklin Ace 1000 several years earlier and it was an eye-opening experience. The Mac changed everything. It provided the tools to flatten the hurdle. Within a year I’d gone out and purchased my very own LC475.

By 1995 things were coming together. A chance introduction had connected me with an amazing writer named Jerry Auld and we produced a handful of small stories together. Armed with the LC, I knew we could make something that, although lacking colour, would stand up well to what we were seeing on the newstand. The only thing missing was an indicia.

Several names came and went before I settled on Attoboy. It had a good rhythm and the right sort of bounce. I liked the way it made a technical term fun. The design came together quickly and before we knew it our comic debuted at Comic Legends in Calgary (thanks Dale!).

And there it sat. It turns out that in the 10k run that is comics publishing, producing the comic amounts to about 1/2k. You’d think a designer working in advertising would appreciate that folks can become interested in something only if they know it exists.

Fortunately the LC provided a means to that end, too. I slapped on a Global Village 56k modem and learned about this thing called the internet that was showing mainstream promise. Six months later the first Attoboy website was born into a single user folder at start-up host Cadvision. Things started rolling. I was getting offers to do other independent comics and made connections with other producers that endure to this day.

We never did sell many of that first comic, but we were making our mark and having fun. The website was getting some nice attention. As 1996 came to a close Attoboy had grown into a full fledged site under its own domain.

Trampled by My Own Horses

Attoboy generated some positive attention from the web-celestia of the day and was responsible for attracting a fair run of gigs from 1996 through 2002. The funny thing was that I was getting as many offers to make websites as I was to make comics. Soon the website offers were far out-distancing the comics offers. Before I knew it, I was working on the Petro-Canada intranet. Soon after that I was Director of Graphic Design for a company called Clarity where I’d go on to build interfaces for AT&T, Suncor and a pile of other companies who all paid better than the comics industry. It was exciting to be a part of something so new and groundbreaking.

The trouble was that the success of that busy time also prevented me from updating my own website (that’s my story and I’m sticking to it) for almost four years. Attoboy entered the twenty-first century gamely clinging to the same old content like a pair of tattered Sperry Topsiders.

Attoboy.com v2, the dark blue one.

Sometime in late 2000 (right around the time Telus completed its buyout of Cadvision) I moved the site to a new host and rebuilt it with the dark blue Client Access frontpage. This short lived version of Attoboy was a client-only site containing restricted access development materials and website prototypes. My oh-so-clever idea was that with no publicly accessible content, there would be no obligation to update. Needless to say, the concept hit the ground like a bag of wet cement.

So I decided to retool Attoboy for content. Surely it wouldn’t take more than a weekend or two. Sixty weekends later, Attoboy v2 was born. It featured a broader cross section of work than any previous iteration of the site and was better organized. It had some interesting technical underpinnings such as php and was, for the first time, totally standards compliant.

One notable change was that the comics content, once center-stage, was now pushed out to the fringes. I never felt really good about that, but there was a lot more corporate work to show than comics work. It seemed that comics would continue to be relegated to hobby status. And that’s exactly what happened for another four years.

As 2009 rolled around it felt like a good time to change things up. I’d been working at extracting myself from the more corporate side of things and trying to be more active in the entertainment side of the industry. Attoboy v3 benefited from ever-advancing technologies such as video and commonplace broadband connectivity. Sophisticated site-building tools made easy work of once-complex architectures. Ironically, this version of the site was simpler than before. Gone were the fly-out menus and floating divs. Gone were the processing forks and crazy css hacks to make everything work. All was good and Attoboy.com could cruise along for the foreseeable future.

Which brings us to Attoboy v4, the multi-hardware site. Not much to say about this currently contentious issue, except that Attoboy.com will look nice on your desktop, laptop and mobile devices. 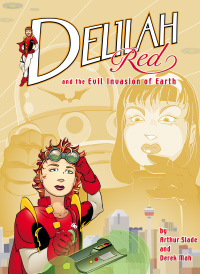 The super-secret project. Don't ask. Thanks for visiting!

There are some new sections that reflect the different sorts of work emerging from the Atto compound these days. The most significant addition is the publishing work which includes the books done with Arthur Slade and covers for Eric Wilson, Shane Peacock, Marty Chan, and Michael Bedard. A few new illustrations have been tossed in there, too, to keep things interesting. Things seem to be moving along and I hope it continues in that direction.

As with previous incarnations of this website, Windows users encountering problems should re-install Windows, reverse polarity, increase the phase variance of the transfer bus and add more neon to the motherboard, in that order. Ahh, I kid because I love… you can do it, Windows, we’re all rooting for you!

Those of you tired of listening to my rants can now divert 100% of your attention away from me when I’m talking. Yup, that’s right. I have a blog. Now you can ignore me in person and read me at your convenience. Everything I do, I do it for you.

Thanks for coming by!