Yes it is long, but my mom thought you would like to know this stuff about me

Sometimes I wonder if it was all a mistake. Everyone expected me to become a computer programmer or an engineer. Something scientific with maths. It was all so obvious. I had hacked myself an account on our school’s HP2000B. I had a slide-rule. I had a programmable calculator that I knew how to program. At 14 I was an early adopter of the Apple ][+ (eventually purchasing my very own Franklin Ace 1000– an early 80s Apple clone) who actually enjoyed manually writing instructions for the 6502 in machine code.

The closest I came to art was plotting shape tables (sprites by another name) or laying out crude pixelated interfaces for my programs. At that time art was something fun to look at in comic books or the original Dungeons and Dragons manuals, but I had no desire to do my own. More importantly I was terrible at it. An abortive attempt at creating a comic book during the ninth grade proved most enlightening. The computer and math things were much easier and I was lazy, so…

Off to the University of Calgary with my Ace 1000 and EL-5103 in hand. Everything was proceeding as expected until faculty requirements put me into a sketching class in my fourth semester. The next few years are kind of a blur.

An old sketch of a roommate's stuffies.

What I remember most is working with some really great people who were very patient with me. During the summer I was immersed in a world of acoustic and lighting design, camera-work, modeling, marketing and illustration. Every day was a challenge. It was exhausting and exhilarating. At school my declared majors were watercolour and pastel, but I was trying every medium I could afford. It was all so new and exciting because I’d never taken a formal art class before. The transition from computer lab to art studio went smoothly. Living on campus allowed me to develop a habit of working through the night, a pattern I still fall into today.

On the recreational side I was playing and coaching three different sports. For a long while the Ace 1000 sat quiet. It wasn’t that I’d lost interest in computers, more that I’d discovered a whole bunch of other equally interesting things. The pursuit of art had a social component that computers of the day did not provide. It would be another fifteen years before geek would be chic. 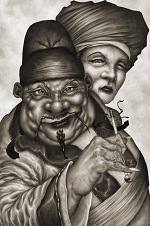 This is not a photo of me. Quite a dashing couple, though, aren't they? This is from Arthur Slade's Villainology.

With all this education came a new-found appreciation of gear. Art is a very tactile affair. Tools had to have that magical combination of responsiveness, consistency and flexibility. A senior designer once told me that good tools can’t improve the work, but poor tools can certainly ruin it. I was fortunate to be working with people who insisted upon great tools. It was pretty cool learning to use genuine sable brushes, ruby-tipped technical pens, Eskofot cameras, lith film, D-10’s and industry standards like the Paasche V and Kodak Aztek. If you know what that stuff is you’re either a historian or pretty old. To this day I really love quality gear.

The line from there to here goes like this: parking attendant, design apprentice, shopping cart pilot, pizza cook, retail manager, clothing designer, gallery manager, waiter, bartender, print sales, Web 1.0 designer, interface designer. Winding throughout and binding it all together was continuing development as a designer and illustrator. The line has led to my current studio in Calgary, Alberta, Canada. Go Flames!

Also not a photo of me.

Nowadays it’s all about the Mac, of course. Themes and subject matter vary from rusty antiques to science fiction and fantasy images, but it all ends up on the computer at some point. There is a funny irony in that I went away from computers to study art and now a computer is my primary illustration and design tool.

My dad, who still doesn’t quite understand what I do, answers questions about me with, “he works with computers.” This from a guy who retired from the cut-throat restaurant business to play in an orchestra for Chinese opera.

Meanwhile the incurable dabbling continues with interests in music (guitar and keyboard) and programming computers (all kinds of stuff, most recently php). Software has revolutionized music creation and the internet has revolutionized the software industry much in the same way Postscript brought desktop publishing to the masses. It is pretty cool to see and hear what people are coming up with.

Still not me. Well, kind of.

Among my hobbies I am working on a hockey management simulation and some graphic novel projects. This is funny because it isn’t a whole lot different from my professional life where I continue to illustrate for publishing and commercial design.

Anyway, that’s it so far. It has been a most challenging road and every bit of it enjoyable from using Penguin Graphics Magician on the original Apple ][+ to figuring out how to publish comic books on iPhones and iPads. I can’t wait to see what happens next.